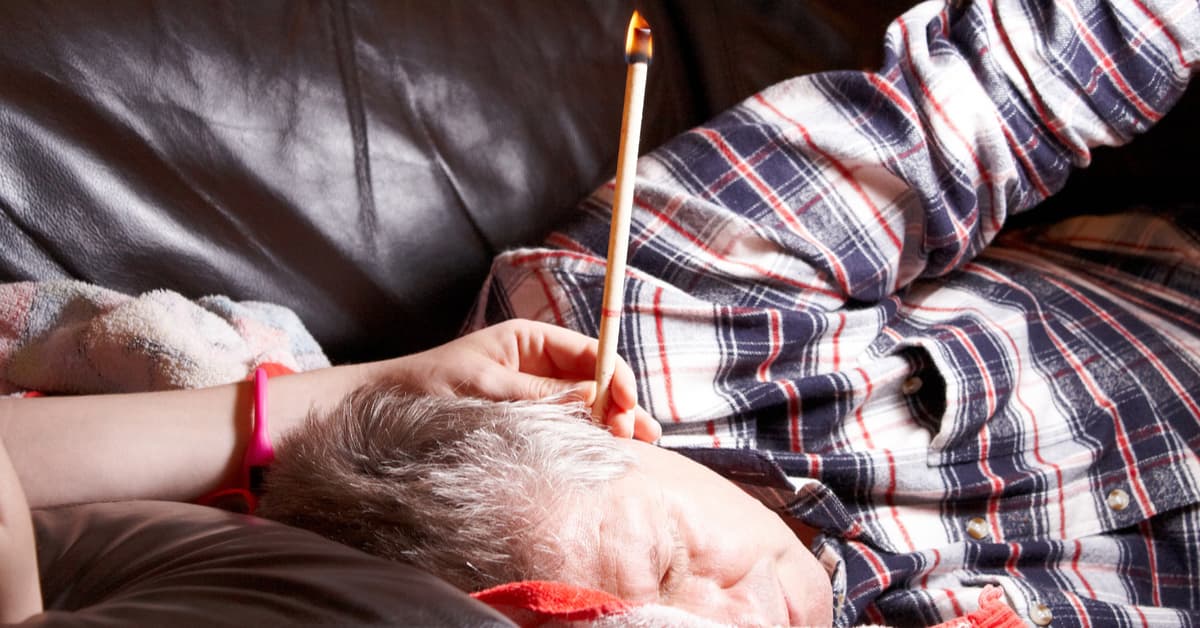 Unfortunately, throughout the history of medical practice, “cure-all” remedies are sometimes proposed that end up being detrimental in hindsight. From leeching to snake oil, sometimes when people need a quick fix, they will turn to any sort of cure. Recently, a cure has been gaining traction that seeks to fix a problem everyone has: a buildup of wax in the ears. The proposed “cure” is called ear candling, and it is done by inserting a hollow, cone-shaped fabric soaked in a waxy substance into the ear and then lighting one end. The fabric is then kept lit for a period of around 10-20 minutes. The desired effect of this procedure is primarily the removal of wax, bacteria, and other debris from the ear canal. Ear candle makers and supporters claim that the “candle”, when lit, creates enough warmth to generate suction. This suction then pulls the impurities and wax out of the ear canal.

However, there is very little evidence to support ear candling as a safe method for removing ear wax. Here at the Hearing Associates of Las Vegas, we offer proven ways to safely remove ear wax and promote hearing recovery. Not only do we have safe and effective ear wax removal services, but through one of our hearing evaluations, we can also directly pinpoint the best methods to prescribe and treat your hearing loss as well.

With something as important as your hearing, it is key to listen to all of the facts. While ear candling might seem like an attractive option for a quick fix, it can have many detrimental effects.

Some of these side effects include burning yourself, puncturing the eardrum, blocking the eardrum with candle wax, bleeding, damage to the middle ear, and developing otitis externa (swimmer’s ear). These risks can greatly increase when the procedure is done with children, as they tend to move around more during the procedure and have smaller ear canals. By practicing ear candling instead of seeking medical attention, people might also aggravate other underlying conditions in the ear.

The FDA (Food and Drug Administration) and other major health authorities have warned of the dangers of ear candling for many years. They have warned people to stay away from the practice and its related products since 2010. They have also sent many warnings to and seized products from ear candle manufacturers and retailers.

Although many people dislike earwax, it is actually a beneficial and healthy feature to our ears. Studies have shown it to be a self-cleansing, lubricating, and antibacterial substance for the ear canal. People without enough earwax often experience dry and itchy ears.

Earwax also naturally works its way out of the ear during motions such as chewing or swallowing. Once outside of the ear canal, earwax usually dries and flakes up, typically leaving the ear soon after.

However, earwax can also build up in the ear canal. This most often occurs when a person has been digging their finger or another object into their ear, pushing the wax deeper into the canal. Anything a person puts in his or her ear, from cotton swabs to toothpicks, can have a detrimental effect and contribute to earwax buildup.

Some symptoms of earwax blockage include earaches or pains, tinnitus or ringing in the ears, partial hearing loss, bad-smelling ears, or itchy ears. If you or anyone you know is experiencing one or more of these symptoms, it is important to contact an audiologist immediately. Untreated, these symptoms can lead to partial or total hearing loss.

If you are seeking a safe treatment for ear wax removal in the Las Vegas area, contact us at one of our two Hearing Associates of Las Vegas clinics. Our hearing specialists can help you diagnose a hearing problem you may even be unaware of that that may lead to further implications down the road.